In the 80’s windsurfing was huge. In some parts of Europe it was said that every second family had a windsurf board, but the sport evolved and it became somewhat a victim of its own success. Gone were the days of big floaty boards which could be sailed in light winds on the kind of lakes that we have here in Switzerland. As the boards got smaller and required more wind the locations where windsurfing could be practiced were reduced which left places like Switzerland a little bit deprived of potential windsurfing spots.

However, windsurfing is making a comeback. Lighter sails, SUP boards which have sails mounted on them and Foils are all regenerating the sport of Windsurfing and encouraging a whole new generation to take the sport up. Switzerland is perfect for learning the basics and for some of the more light wind varieties of the sport. For the hard-core there are even some places in Switzerland that can get windy enough to practice some of the more high performance aspects of the sport. You will not find perfect down the line wave sailing, but for freestyle, freeride, foiling and windSUP you may be able to get a few days a year on the water.

Some Swiss lakes have very poor wind statistics and in general windsurfing on lake Zurich will certainly be a rare event. However, Lakes like Urnersee, Walensee, Neuenburgersee and Lake Geneva often get quite good wind in Summer. In general different lakes benefit from different winds so I’ll try to explain these winds below.

Föhn: The Föhn is a wind that is generated by a pressure gradient between two sides of a mountain range. In Switzerland bad weather on one side of the Alps and good weather on the other leads to a typical Föhn situation. Usually lakes in a north/south direction in a Föhn affected area benefit from this wind, but beware it can be incredibly strong sometimes getting up to gusts of 40 knots. South Föhn is usually felt on the Northern side of the Alps with a strong and warm Southerly wind (Urnersee, Walensee, Aegerisee) and North Föhn in Ticino and the Northern Italian Lakes (Como and Garda) presents as a strong Northerly wind

To monitor the Föhn you can check the Föhn diagram here. Look for a pressure gradient of more than about 8HPa and you should be able to windsurf on the Urnersee of the Walensee. If the gradient is high enough the wind will come through to the Aegerisee and potentially also the Zugersee.

Bise: Bise is a cold North Easterly wind that is often prevalent in Autumn. It can get quite strong and is usually most potent on the lakes in the “Three Lake Land” (Bielersee, Neuenburgersee, Murtensee) and on Lake Geneva. Some other lakes may get some Bise to a smaller extent like the Zugersee.

To monitor the Bise you can check the Bise diagram here. Look for a pressure gradient of more than about 4 HPa and you should be able to windsurf on the Bielersee, Neuenburgersee, Murtensee or Lake Geneva.

South West: This is a low pressure wind which is felt as storm fronts race across Europe. Usually this wind has lost a lot of it’s strength by the time it reaches Switzerland and is accompanied by frontal weather systems. The best lakes for windsurfing with South West wind are Lake Geneva, Murtensee, Neuenburgersee, Bielersee and Bodensee (Lake Constance)

Thermal: In summer a few Swiss Lakes can get a good Thermal wind blowing. On days when it cools down quite a lot at night and there is a lot of sunshine giving radiative heat to the mountains during the day you can expect in the region of 15 to 20 knots on a few Swiss Lakes such as the Urnersee or Silvaplana.

Swiss Lakes are fitted out with warning systems which light up when the winds are expected to get over 25 knots. With expected winds of more than 25 knots you will see orange lights flashing at approximately 40 flashes per second (high wind warning) and with wind speeds expected to be over 33 knots the lights will flash at 90 flashes per second (storm warning). Just be aware that if you go on the water during storm warning you may get a hefty bill if you need to be rescued.

There is also a national warning system which will notify you of any expected strong winds in the coming forecast periods. The easiest way to access this is through the Meteo Suisse mobile app. (Available for Android or iPhone). You can subscribe to these warnings by selecting Hazards in the App, then Lakes and Airports, tapping on the windsock associated with the lake you are interested in and “Subscribe to Push-Warnings”. You will then be notified of any impending wind on your selected lakes.

Windsurfing seems to be tolerated on most lakes in Switzerland but it’s definitely worth checking out locally if it’s ok to launch. Kitesurfing was until recently only allowed in a few select places but this has recently been relaxed and many lakes have somewhere to launch kites now. There may however be restrictions as to where you launch and enter/leave the water and how far from shore you need to stay when kitesurfing though.

I’ve witnessed some pretty crazy safety issues on Swiss Lakes such as people swimming after their board and sail disconnected and nobody stopping to help or people quite literally sailing head on into someone else and not stopping to see if the person was ok. While I hope these incidents are few and far between I tend to sail with the attitude that if something happens I’m on my own even if there are others around. I would strongly encourage all windsurfers (or all water users in general) to keep their eyes open though and help those around them who might need help.

I would suggest significantly floatier equipment than you would usually use if you intend to windsurf regularly in Switzerland. Boards of over 120 litres and sail sizes in the region of 7 to 9 square metres will probably get you on the water most often. Foil equipment will probably also help you get on the water a little more. If you are not after high performance we have been using the STX inflatable boards for teaching and recreational purposes on Swiss Lakes this past season and are pretty impressed with the stability, easy of use and value for money which they offer all in a package which can be easily stored and transported.

On the lakes with the most chance of wind there is the possibility to rent high performance equipment. Silvaplana, Urnersee and Murtensee all have reasonable rental centres with quite decent equipment.

Swiss Alpine Adventure/Wannabe Watersports has a couple of STX Inflatable windsurf boards available for rental, testing and coaching if you are looking for equipment which is easier to transport or just to have easy to use equipment to get onto the water. Contact us for further information.

If all else fails Switzerland is located centrally enough in Europe to leave a lot of travel options if you would like to get windsurfing in warmer or windier regions. With international flights from Zurich, Basel and Geneva there are direct flights to windsurfing locations such as The Canaries, Cape Verde, The Caribbean, Morocco, Egypt, Greece and South Africa (to name a few).

Zurich is only about 5 hours by car from the Mediterranean coast around Genoa where there are some windsurfing possibilities and from where it is only a short ferry trip to either Corsica or Sardinia. I’ve been surprised by the quality of conditions I’ve found on my trips to the Med.

While Switzerland may not be the most epic Windsurfing land on the planet. There are many options to get on the water here and travel from Switzerland to other Windsurfing destinations is quite easy.

[…] immediate vicinity do not go to help. The first one that springs to mind is a number of years ago windsurfing on the Urnersee. Someone’s sail and board separated and they were swimming in the middle of […] 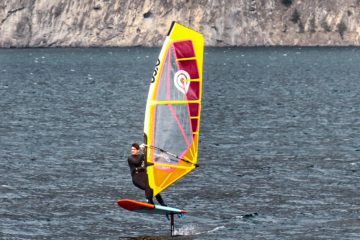 Learning to Foil Windsurf has been on my to do list for a few years now. This year I decided it was now or never. This is my experience.